On a typical Sunday morning last May in Caraz (way back in 2016),  I was walking through the market where my host-mom sells fruits, when the urge to walk down to the Plaza de Armas (Town Square) suddenly came upon me. After following the small stream of people heading down to the Plaza, I stumbled upon a really neat event organized to celebrate Corpus Christi, a Catholic holiday celebrated throughout Perú (more info here). The event in question was artistic in nature, and involved the creation of massive “rugs” made out of wet, dyed sawdust. Check out my post from last May to see how the first year went.

While last year´s event was a surprise, this year I was prepared. I knew about the event in advance, and had even coordinated with some students from my local school to help out with their alfombra (rug). However, due to various circumstances once again I did not get the chance to make a rug, instead assuming my regular role of documentarian. But, I like taking photos, and Peruvian jóvenes (young people) tend to like having photos taken of them, so it all works out in the end.

What follows are an abundance of photos of the different rugs created for the celebration of Corpus Cristi. The rugs are largely made of dyed sawdust, but some also include other organic materials such as leaves, flowers, branches, etc. Generally, the rugs depict different religious symbols (crosses, Jesus, doves, flowers, etc.) and/or Biblical verses that the student first sketch out with chalk, and then fill in with the sawdust. Of course, the rugs also display the name of the school that created it; school pride is a big deal in Caraz.

The rugs are created all along the town square, essentially forming a beautiful, continuous sawdust walkway upon which the members of the Catholic procession can walk. But enough talking, enjoy the gorgeous photos and let me know which is your favorite alfombra! 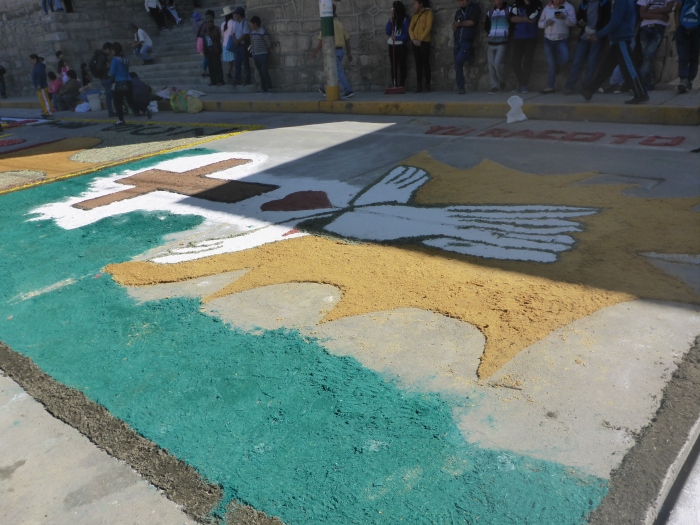 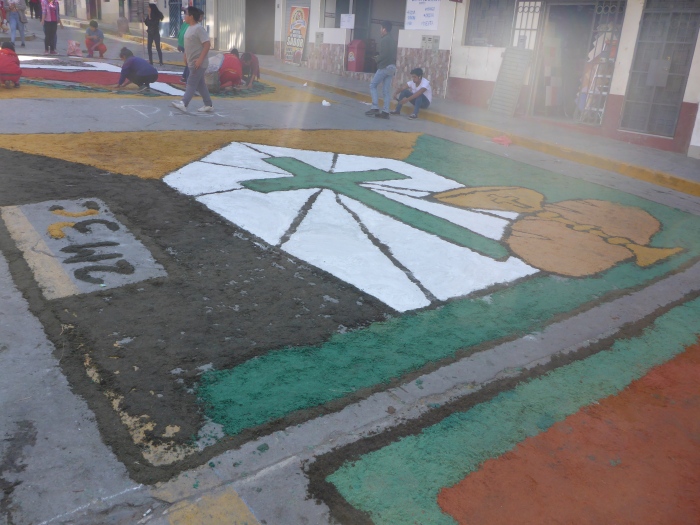 Once the students finish their alfombras, which usually takes anywhere from 3-5 hours, it only takes about 1 hour before they fulfill their purpose: to be walked upon by the religious procession.

As the procession ends, my good friends in Limpieza Pública (public cleaning) get the fun task of sweeping away each and every rug. 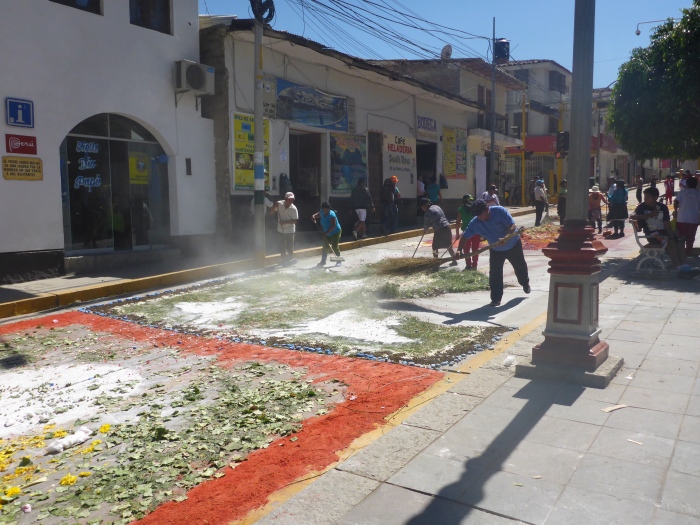 I love the alfombras because they are ephemeral. A flash of beauty, which is then trampled on, destroyed, brushed away, and ultimately forgotten. In many ways, the alfombras remind me of the mandalas of the Tibetan monks.

While once again I missed out on the alfombra party, I´m hoping that there is still hope for me since I´ll be sticking around Perú for a 3rd year with the Peace Corps.

As I mentioned in my latest post about my 3rd birthday here in Perú, I have received random, ceramic/plaster figurines for my two birthdays in Caraz. I promised a photo, and here it is.

My strange figurines in all their glory. I’m not entirely sure what I am going to do with them whenever I eventually leave Perú.

At the beginning of June, I celebrated my 3rd birthday since I’ve been to Perú and I am now a quarter of a century old. I’ve never been one to make a huge deal for my birthday, and so my previous two birthdays here in Perú were rather tranquilo. This past birthday was no different, just a little more strange.

I find it awkward to tell people when my birthday is, and so as I woke up on the anniversary of my birth, I just treated it as any other day. I got up, got dressed, and went in to have breakfast with my host-family. As I was leaving the kitchen and letting them know what I was doing for the day, something clicked for them and they remembered it was my birthday. I promptly received several “Peruvian hugs” which as my fellow Volunteers know consists of a half “hug”/half pat on the back, and was told to be sure to return for lunch.

And so, I continued the day as normal and went to the Municipality to prepare for my event with the UGEL. In honor of International Day of the Environment, we were hosting a training for student councils from several schools about environmental management and creating/implementing environmental plans. I gave the first presentation, talking to the attendees about the human impact on the environment, on the consequences of poor trash management, and what student councils could do in their schools to be more environmentally-friendly. We also did a practical activity where each group was presented an environmental problem that they needed to solve with a creative solution.

In between my presentation and the next, we had some time to kill so we decided to do a stretching IceBreaker. When we still had more time to kill, I jokingly suggested to my socia that everyone could sing me happy birthday since it was, after all, my birthday. Well, what I intended as a joke turned into a full blown chorus of the Peruvian Happy Birthday song which starts in English, switches to a verse in Spanish, and then finishes in Spanish with a verse about cutting the cake and giving hugs. It was nice, but also kind of awkward, and then only became more awkward when one of the students asked his professor to ask me if they could give me hugs. I acquiesced, and for about 5 minutes I was trapped in a never ending hug train from all of the students in attendance, all of whom were far smaller than me. Let it be known, that of the 40+ students that ended up hugging me & wishing me a happy birthday, I only actually knew one. I really wish someone had documented the experience. The event ended with all of the participants writing their compromiso con el medio ambiente (environmental promise) on a cut-out leaf and taping it to a tree banner.

After the conclusion of the event, which ended up going really well,  I arrived late to my house where I enjoyed a special meal of Lomo Saltado, one of my favorite Peruvian dishes, that my host-mom had kindly prepared for me.

After lunch, I received a phone call from one of my socios asking if I was coming into the municipality in the afternoon. I told him I wasn’t planning to, but could, and would be in as soon as possible.

After catching a moto and taking my 1 sole trip to Caraz, I walked down to my office and was greeted by the secretary of my office saying that she was angry with me. I was confused, and asked why, and she said I knew why. Eventually, I got her to admit she was upset that I hadn’t told them it was my birthday. And thus began the “apology” and subsequent explanation that I find it awkward to tell people about my birthday.

Regardless, feelings were quickly mended and they organized a dinner at a Pollería (chicken place) for later in the evening to celebrate. Around 6pm, I show up to the pollería and poco a poco my socios started to arrive. We ended up spending about 1.5 hours eating pollo a la brasa and just talking, and it ended up being a nice night; words were spoken, a gift was given, and then we all went our separate ways for the evening.

When I got home I opened up my gift, which turned out to be a ceramic statue of a bearded Captain standing on a boat with a cigar in his mouth, along with a can of Cusqueña beer. So far, I’m 3 for 3 in receiving strange ceramic statues for my birthday. I guess gringos are hard to shop for jaja. I’ll have to take a photo of my growing statue collection and put it in a future post.

At the end of the evening, I remembered that my parents had brought me a card from my sister, with a note saying, Do not open until your birthday. The card was well worth the wait.

The best part of the card were three quotes from various incarnations of The Doctor that, at least for me, ring quite true for me and my Peace Corps service.

So all in all, my birthday was unusual, and nothing like any birthday I have had in the U.S. And, since I am extending one more year, I still have one more Peruvian birthday to go before I finish up my Peace Corps service.

The content of this website is mine alone and does not necessarily reflect the views of the U.S. Government, the Peace Corps, the Peruvian Government or Penn State.